I feel like every single day my illness (or illnesses) is changing. There seems to always be something new and unexpected happening within my body. I know my body at war but I would really appreciate if it could just take a break and let me understand what’s going on for a little while before morphing into something else.

I’ve been experiencing a lot of electrical sensations that are very painful running through my spine. It’s so uncomfortable and the only thing that seems to help at all is lying flat on my back, not moving, and using a heating pad where it hurts the most. If I move at all, though, the electrical pain shoots right through me again.

My foot has also had this weirdly extreme pressure/electricity/fire. I don’t know how to describe it. It hurts.

And my ribs! The left side of my ribs has been feeling as though there is so much pressure being applied front and back. It’s like my rib cage is being crushed in a vice. It makes it hard to stand up (or sit up, for that matter) and to catch my breath. Flattening my body out and not moving also makes this sensation feel a little better but the second I move it comes right back. Maybe I could even describe it as having a corset or Spanx that are way too tight against my ribs and back, although I’ve never worn a corset or Spanx so maybe I can’t freely use that example.

There’s also fire and pins and needles racing through my hands and feet. This is on top of everything else I've talked about in previous posts describing what I'm dealing with. The migraines and intense head pains are still around. I still hurt, a lot. I still get very confused.

I've been keeping track of all of my symptoms better than I have ever before. I use an Erin Condren planner for daily life things and I've been using the Perpetual Calendar that came with it to track my health. I'm thinking it will be easy for a doctor or nurse to read and help them understand what I'm dealing with on a daily basis better. 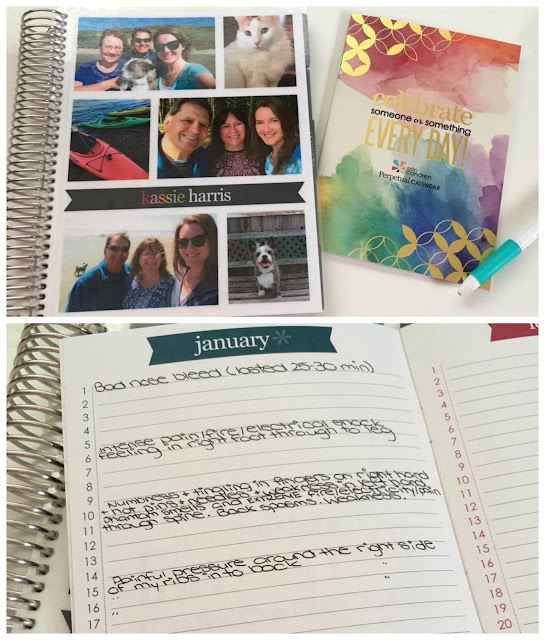 I’m wishing summer was here again. I felt so good this summer. I felt strong and healthy. Now I’m just feeling discouraged but I have some good news. I’m insured again. I qualified for OHP, since I’m disabled, and I’ve been assigned to the doctor that I wanted to be so that’s awesome. I need to make an appointment and go in soon but I’m scared. I’m scared that they’ll dismiss my symptoms or not believe what I’m saying like doctors have in the past. I feel damaged by my past experiences with my illness and medical professionals.

I know I’ve had some really great doctors who have listened and understood and tried to help me in whatever way they could but I’ve also had some terrible ones and those terrible ones have seemingly scarred me. I don’t want to ever again feel the way that doctor made me feel when I was 22. I've mentioned that in the past but it's something I'd rather forget.

I’m feeling more and more like it might, in fact, be MS but we’ll have to wait and see. Thinking back, though, the medications I was on for Lupus and Fibro did nothing at all so that’s also another sign that it’s not what they originally though. I’ll keep you all updated.

I've also been feeling really sad lately. I don't know if it's the weather causing my gloomy mood or if I'm just feeling a bit down. My anxiety has been hanging around a lot lately, too. I might be a little depressed but I'm still so grateful for my family. That just needs to be said. I love them so much.

One final thing, the other night I was hurting so much and Hunter was on my chest snuggling me and he did the most amazing thing. I kept squeezing his fur when the pain (not hurting him, of course) was coursing through me and every time I did that he would put his paw on my face and hold me. It was the sweetest thing and I Just had to share that with you.

Hi, my name is Kassie! I am a natural beauty blogger, Mom to a cat named Hunter and the enduring spirit of Parker, sister to pup Cooper, and daughter to the most amazing parents a girl could ever ask for. I love my family and my life, even though being ill can makes things a little difficult. This blog is where I share the journey of living with a disability, all the ups, downs, and whatever else comes my way.

I also have another blog, Beautiful Basics, where I post natural beauty product reviews and talk about clean, green living.